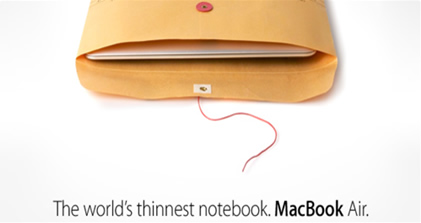 Apple has released what they tout as the World’s Thinnest Notebook, and you can pre-order it now at the Apple Store.

This is the ad for their latest release: [youtube:http://youtube.com/watch?v=GBCfW9-hjKI]

This video is bit longer but gives you a guided tour of the MacBook Air.

I have to say it looks pretty sweet, and even though I’m not currently a Mac user, it definitely looks tantalizing enough to tempt even me!

Processing Capability
The MacBook Air comes with Intel Core 2 Duo processor with 4MB on-chip shared L2 cache running at full processor speed wit 800MHz frontside bus and 2GB of 667MHz DDR2 SDRAM onboard. The standard processer is 1.6GHz but there is the option to upgrade to 1.8GHz.

You can pre-order yours at the Apple Store today and be one of the first people to own the world’s thinnest notebook!

Which CMS do I Prefer?