Building a Website with Drupal 6 – Part 4: Playing with Blocks

Welcome to part 4 of our tutorial on building a website with Drupal 6.  Previously we covered: Part 1: Introduction Part 2: Installing Drupal 6 Part 3: Configuring your Site As we go through this tutorials I am building a Drupal resource site called Learn Drupal.  So our website so far looks like this: (You can click on the images for larger views) 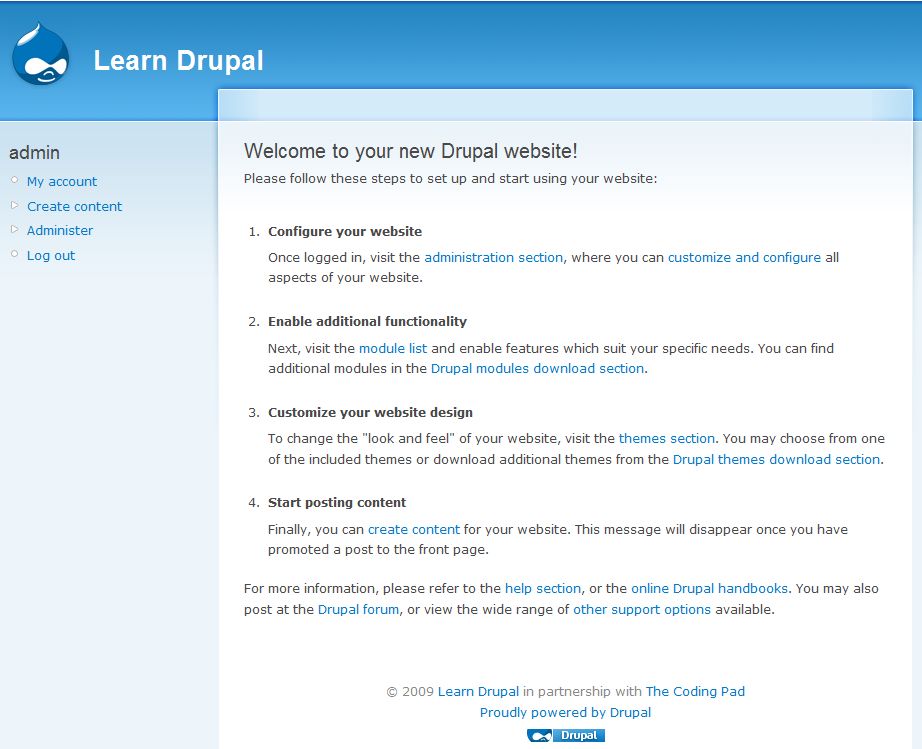 In the last post we did some site configuration, modified our footer, added a slogan and more. In today's post and over the next few posts we're going to start build out site out, by looking through the options in the admin section of Site Building and laying out our site, adding sections, and adding functionality. Today we get to play with blocks!

Building a Website with Drupal 6 – Part 3: Configuring your Site

Welcome to part 3 of our tutorial on building a website with Drupal 6. In part 1 we did a brief introduction, and in part 2 we installed Drupal.  As we go through this tutorials I am building a Drupal resource site called Learn Drupal.  So our website so far looks like this: (You can click on the images for larger views) 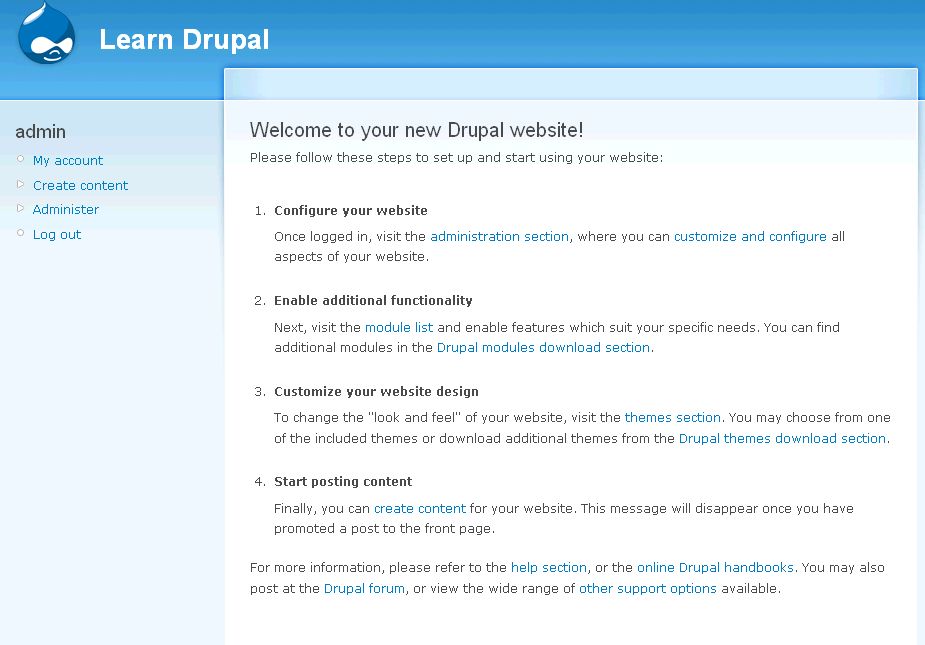 In this installment, we're going to further configure our website and learn more about the administrative back end of a Drupal website.  So log in to the website with your admin username and password.  On the left side is a navigation bar, and we're going to click on "Administer" and look at the admin back end.

In the first part of this tutorial we introduced Drupal 6.  As part of your homework I asked that you install a webserver and get an FTP program so that you can install and run Drupal.  In this tutorial we're going to go ahead and start the process of installing and configuring our Drupal install. The website that I am building and showing you screenshots of is Learn Drupal, the Drupal resource site that I mentioned in the last post. I am building it online so that you can follow along or visit later and see how different things that we mention here were implemented. 1. Create your settings.php file. You can do this step before or after you upload the Drupal install files onto your server.  Go into the sites/default folder.  Here you will find the file default.settings.php.  Copy and paste this file and rename the copy to settings.php.  So you should now have two files in the sites/default folder - settings.php and default.settings.php.  Drupal needs both of these files to exist for the install to be successful.

As promised, we are going to be moving on to Drupal 6, which is the current version of Drupal.  Instead of converting the Drupal Pad to version 6 as I had planned, I have decided to keep that website in Drupal 5 and create a whole new website in Drupal 6 for these series of tutorials because there is still sufficient interest in using Drupal 5.  I will tag the tutorials "Drupal 6" and "Drupal 5" so that you can choose which ones you're interested in. So let's get right into it.  We are going to be working with Drupal 6.10, the current version as of this writing.  There are many ways to write a tutorial. I could introduce you to ALL the elements of a Drupal site and explain them all in theory, but then you'd probably get bored and maybe feel overwhelmed. Instead, I will introduce them as we need them so that you can know what they are as well as see them in action.  For example I will introduce the concept of modules when we start enabling modules, themes when we start enabling themes, blocks as we use them, and so on. What are we going to build? Through this series of tutorials we will be creating a Drupal Resource Site.  We're going to create a place on the web where we can add tutorials, news about Drupal, articles, and so on.  We may at a future date include other features such as a user forum and more.

In this post I am going to walk you, briefly, through the steps I followed to install Fedora 10 on my Thinkpad T43 which already has Windows XP professional running. I have installed Linux before for someone else, but never on a computer that had another OS on it, so I was quite nervous because this is my primary laptop on which I do most of my school and work stuff. The goal of installing Fedora is to start myself towards incorporating open source and free tools in my everyday work and life, and supporting the open source movement. I don't have screenshots of my install process to share but you can find some excellent screenshots on the links at the bottom of this post. Pre Install Information I will start  by sharing my basic Laptop info: It's a Thinkpad T43P Intel(R) Pentium(R) M Processor: 2.00GHz 1.00GB of RAM 80GB hard drive Currently running  Windows XP Pro, SP2